It happened just after we planted salad amaranth seedlings in our vegetable garden. There are a wide variety of amaranth species. The ones that we are growing this year are for eating their leaves, not ornamental, and this is the first time for us to grow these types of amaranth.

Amaranths are slow starters. We are raising them from seeds, but their growth after germination takes longer than other vegetables. It is said that amaranth don’t like to be transplanted and are difficult to establish in the ground if the seedlings haven’t grown strong enough. So we carefully grew them to the size which they can be transplanted in the garden and planted them. We gave them lots of water after transplanting and they looked totally fine in the evening on that day.

A weird thing happened the next morning, two of the amaranth seedlings we had planted disappeared. Literally, they vanished. It was easy to notice because there was a gap of two seedlings in the neatly planted rows. 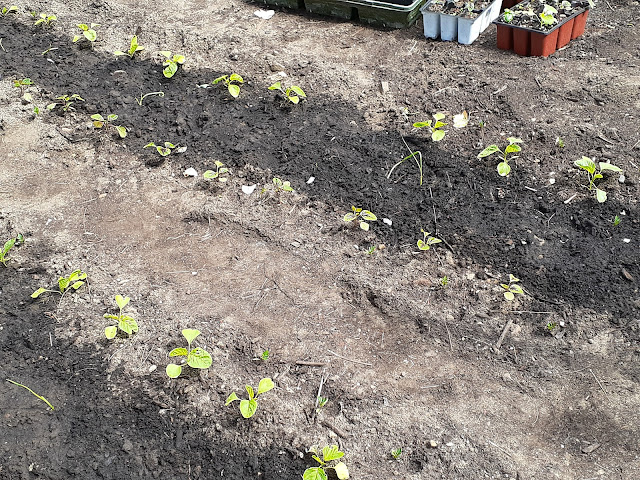 At the same time, I found some insect bites on the leaves of other amaranth plants. 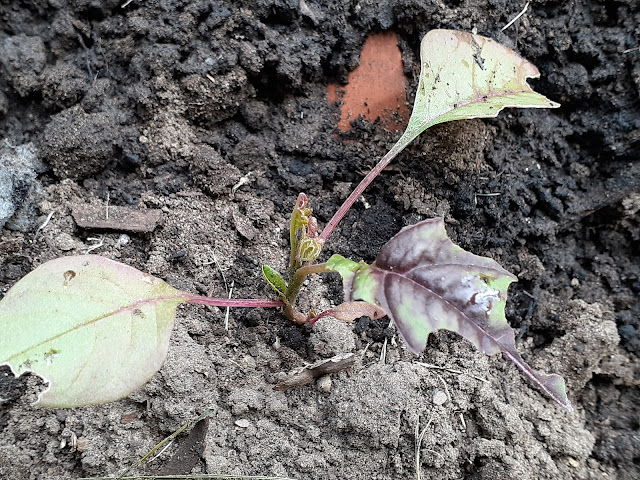 That’s why I thought it might have been aphids. I planted some garlic nearby to repel them and sprayed hot pepper and garlic water.

I still couldn’t figure out what it was because those two seedlings have gone without any trace. Anyway, we have lots more amaranth seedlings. I planted other ones in the place where the two had disappeared.

The next morning, however, one of the red amaranth plants had disappeared again. At the same time, one of the stems of Komatsuna (Japanese mustard spinach) had been bitten off by something. It was bitten at the lowest part of the stem, just above the ground. The poor Komatsuna was cruelly cut off at the base and the remains of the eaten leaf were scattered around there.

We always have some squirrels, rabbits, deer and other animals that destroy our vegetable patch and flower beds, so I thought it must have been one of the squirrels which had been hopping around our garden recently. I put some coffee grounds in a plastic dish nearby, which may or may not work for squirrels, but is supposed to keep rabbits and cats away.

The tragedy hadn’t yet ended. The chilli pepper plant that I had planted the day before had been knocked down from the root the next morning, and one of the beans that we’d planted diagonally across from it attacked the same. Its 20cm tall seedlings were chopped off.

“Squirrels again!” I was annoyed. My boyfriend carefully observed and calmly commented,

“But there are no tracks, so it could’ve been a bird.”

Letting him be a detective, I planted another chilli seedling in the place where it had been attacked. We still have plenty of seedlings in stock as well.

I had thought that amaranth would be relatively easy to grow once it was planted in the garden. I was surprised that it would suffer such damage and started researching the pests that tend to attack amaranth.

Then, I found information about the “cutworms”. They hide in the soil during the day and come out at night to eat the stems of young plants, such as vegetable seedlings, by ripping them out from the base.

They are particularly likely to damage newly planted seedlings. If you find that a seedling that was healthy a day before has suddenly gone bad the next morning, there is a good chance that it is a cutworm attack. The risk of damage by cutworms is also higher if you use compost or organic fertilizer and neat gardens with few weeds are more likely to be affected. This is because they feed on the young shoots of weeds, but they have nothing else to eat in a weed free garden so they eat the vegetable seedlings. Theoretically, letting a little weed growth is also another method to lessen the damage of your vegetable seedlings by cutworms.

They are hiding under the ground, so I dug up 2 to 3 cm of soil around the damaged seedlings and… 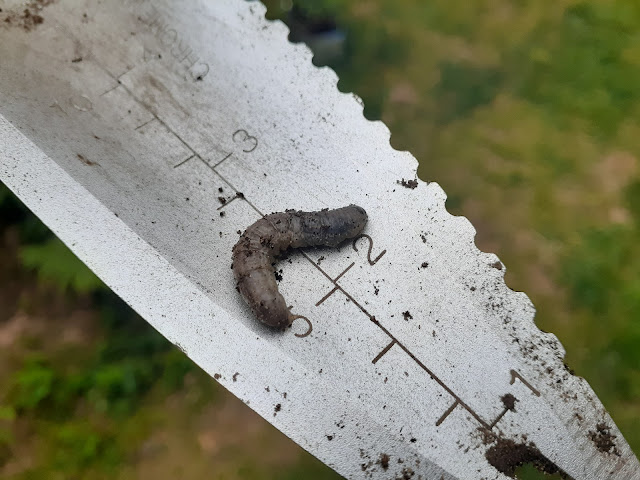 I caught cutworms near all the affected seedlings; amaranth, Komatsuna and beans.

They are the larvae of the moth. I remember there were a lot of butterflies flying around in the early spring this year. We had a bad feeling about this at that time…

The pests I caught were thrown away in the woods. We don’t use any chemicals or insecticides, so I think the only thing we can do is to capture them each time we find damage. They are a pest for us, but they might have some role to play in nature. So I hope we can live together well.
<<< Previous Post: We harvested the radishes and put them in the fridge with their leaves to keep them fresh
Next Post >>> Chinese cabbage has gone to flower, but you can eat them!

Mulching for the first time

A couple of days ago, we saw the weather forecast predicting a minimum temperature of 1 degree Celsius. Our worry was th...

Can seeds germinate in coffee and tea grounds?

Some people use coffee and tea grounds for gardening. We have put them in our compost for years, but never used them its...

This year we've been getting more and more involved in gardening. Apart from taking care of the vegetables and flowers, ...
We harvested the radishes and put them in the fridge with their leaves to keep them fresh
Chinese cabbage has gone to flower, but you can eat them!
Home
amaranth