When we first bought the seeds online this spring, I was excited because they had seeds of Japanese green Shiso which is a type of herbs often used in Japanese cuisine. However, the seeds that were delivered were Korean Shiso even though we ordered Japanese Shiso seeds. Perhaps the Japanese green Shiso were sold out. The package said “Shiso”, but we found out that they were Korean Shiso as they were growing, which disappointed me a lot. 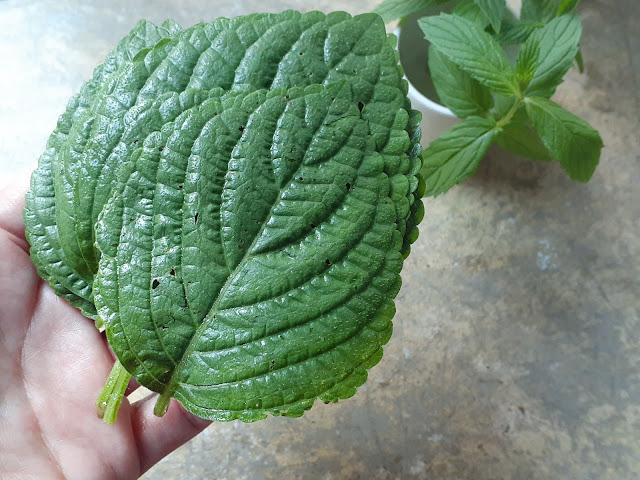 Korean Shiso is a herb used in Korean cuisine and is often served with BBQ meat for wrapping with lettuce. It has a unique flavour, which is not everyone’s favourite.

This is the first time for us to grow Korean Shiso. I had the impression that the germination rate is better than Japanese Shiso. Korean Shiso seeds may not need as high a temperature as Japanese ones to germinate. Since it is from Korea, it may be suitable for a slightly cooler climate.

Korean Shiso leaves look very similar to Japanese Shiso. After they have grown to a certain size, the more you harvest, the more they grow. Recently I’ve been able to harvest them everyday. I think I need to find more recipes for Korean Shiso!

>>> My recipe for Korean Shiso

Next Post >>> How to avoid pests in my garden: the things that I am doing

We have been expanding our vegetable garden and flower beds every year. This year, we've built a new raised bed and we'r...

Making good use of weeds

Weeds are often thought of as a gardeners’ enemy. In our vegetable garden we usually remove the weeds as soon as possibl...

It was very windy today, so I didn’t do much work outside. The temperature went up to 23 degrees yesterday and down to ...
Sponsored links
We bought vegetable seeds online
How to avoid pests in my garden: the things that I am doing
Home
未分類
Sponsored links