We bought vegetable seeds online again at the same shop we bought in early spring this year.

The shop is specifically selling organic seeds, but it’s not the reason why we chose that shop. It’s because they have some Asian vegetable seeds, so we purchased them again. 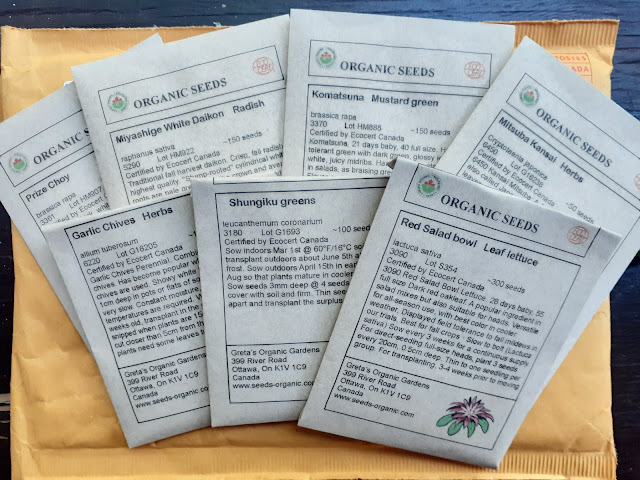 We ordered Mitsuba and Komatsuna (Japanese mustard green) again as we did last time.  We also ordered Daikon radish and Shungiku (garland chrysanthemum).

The seeds that we bought were delivered by mail. We just need to open the mailbox and take them. They arrived relatively quickly this time as well as last time.

However, when we opened the envelope some of the seeds had surprisingly spilled out…

It was a bit annoying that the seeds leaked out from the individual packages to the envelope.

We bought 7 kinds of seeds, and the seeds which had leaked were only one kind. So, I opened the packages one by one to find which package was leaking. They were red lettuce seeds and that package was not sealed well.

Each package of the seeds is $ 3.5 and each package has a different quantity of seeds. Luckily, there are 300 seeds in the red lettuce in a bag, so it’s kind of okay to lose a few of them, but if this had been something with only 50 seeds in a bag such as Mitsuba, I would have been furious.

Making garden salad with the vegetables we harvested!

The vegetables are now getting ready to be harvested. Today we harvested lettuce, arugula, radishes and cucumbe...

Harvesting leafy vegetables: the more you harvest, the more they grow!

This is probably the first year for us to grow so many different leafy greens. We have only grown Shanghai choy and arug...

Eddos are growing day by day! Our star plant in 2021

Some eddos which we had bought at the supermarket sprouted, so we planted them, wondering if these tropical pla...
After the rain
Harvesting Korean Shiso
Home
未分類