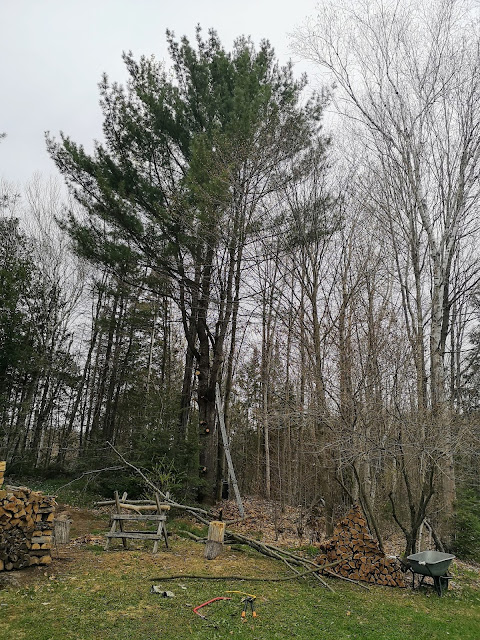 We are living in the woods in Canada. We don’t have urban noise or pollution, but one thing which can be a challenge is that the trees grow so quickly around our garden. The problem is that our garden cannot get enough sunshine because of the surrounding trees. We don’t really like chopping down the trees, but we need to control them in order to get sunshine and grow our vegetables and flowers in the garden. We try to plant new trees to replace those that are chopped down.

There are a few pine trees in our garden. One of them has freely grown its branches in all directions and gave a big shade on one part of our garden. We don’t want to chop the pine tree down, but we want to have more sun. So my boyfriend chopped off some of the branches yesterday. It looked a little tricky, but he managed to do it. Now we have more space with full sun in the garden, we have to think about what to plant there. 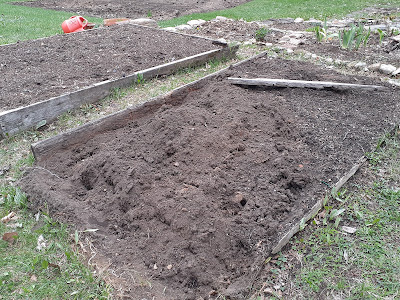 Also, we are planning to renew the raised vegetable gardens this year. We have two of them and the wooden border was partially broken. My boyfriend went to the shop and bought six pieces of cedar wood to replace the wood border. We are going to order new compost as well. 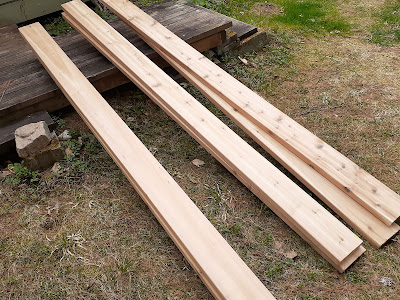 While he was cutting the pine branches, I was digging the lilies in the Japanese garden. 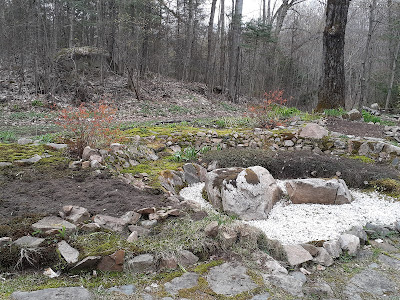 In 2016, we made a new garden in a place which was completely covered with weeds. We started digging the soil to remove the weed and found two big rocks under the soil. They were so big and heavy that it was impossible to move them, so we decided to reserve them and put the marble stones around them to make it look like a Japanese Zen garden. I don’t know much about Zen gardens even though I am Japanese, but the garden looked OK after all the hard work. However, my mistake was that I transplanted some orange lilies in that area. I thought the lilies would match the Japanese garden and they looked good to me until I realised that the lilies are strong enough to take over the place just like weed.

After we removed the weed from that part of the garden, the lilies started taking over. I left them till this spring, but I thought that I cannot let them take over anymore. Therefore, I dug the lilies out from that area. The Japanese garden now looks like it’s  “under renovation”. I think we need to spend this summer reorganising it.

<<< Previous Post: Can we Grow Bean Sprouts in the Kitchen?

Potting up arugula for kitchen cultivation

We grow arugula every year. It's very easy to grow and once it's established you'll be able to continually harvest it. I...

We started reorganising the front garden last year. Before that, a large part of it was taken over by orange lilies and...

We went to a garden centre to buy flowers and seeds

It was raining all day yesterday. We went to the gardening centre nearby to buy some flowers and seeds. We bought a fe...

The reason why I prefer sowing indoors

When and where to sow depends very much on the temperature and the space. I prefer sowing most vegetables indoors rathe...
Sponsored links
Can we Grow Bean Sprouts in the Kitchen?
We are lacking heat…
Home
garden design
Sponsored links