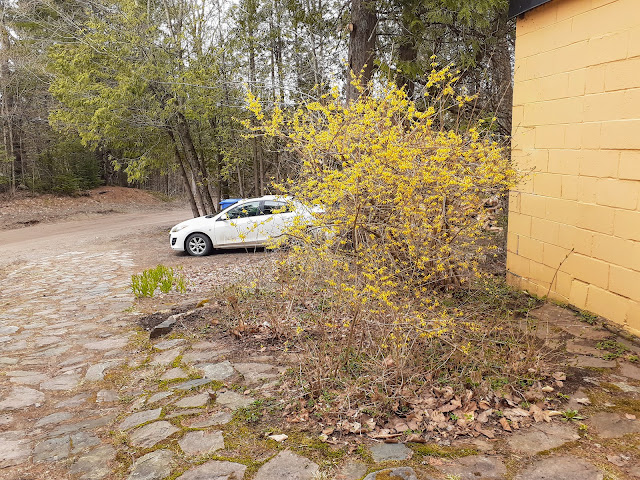 We have forsythia bushes in two places in our garden, but neither of them are placed where we can see them easily from our house. So we are planning to transplant some of them to the old garden which is currently covered with lilies and weeds at the moment. 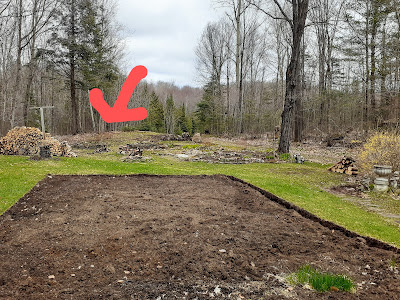 This old garden has been ignored for years, despite the fact it’s a kind of visual focus spot in our garden until the vegetables grow tall and block our view from the house. The forsythia is like our shining stars in the monotone garden this time of the year. We imagine that it’ll be fantastic if we have a forsythia on the top spot of the old garden.

It’s not the best time to transplant the forsythia now, but I started the preparation, digging the soil in the old garden to take the weeds out.

I spent one hour digging the soil where we are going to transplant the forsythia. Because I removed some weeds and lilies which are taking over our garden last year too, it was not so difficult. There were some rocks and thick roots which were manageable. However, when I accidentally dug into a part of a plastic bag (or sheet?), I involuntarily raised a voice, “Ah…!”

It reminded me that my boyfriend told me that the previous owner of this house might have buried a cat there. A cat is fine, maybe, but would it be really only a cat? If… , if there is something bigger than a cat, I wouldn’t know what to do.

According to my boyfriend who had bought this house before I came to Canada, this house was built in the 1960’s by a brick maker. We live in the woods in the countryside. We don’t know who would have thrown away what kind of things. I didn’t stop removing the weeds, but I didn’t dig the plastic bag out, just letting it be for now…

<<< Previous Post: Daffodil bloomed. We prepared the vegetable patch before it rained

The Concept of ​​a Cut Flower Garden

We are watching the back numbers of the BBC gardening show "Gardeners' World" on Amazon Prime. It's packed with inspirin...

How to Regrow Spring Onions

I often use spring onions for cooking. Spring onions are very strong and you can regrow them easily at home. In fact, l...

Today, I sowed some mixed lettuce. I soaked the lettuce seeds for 5 hours before planting, just like I did with the m...
Sponsored links
Daffodil bloomed. We prepared the vegetable patch before it rained
Spring Onions are Regrowing!
Home
flowers
Sponsored links