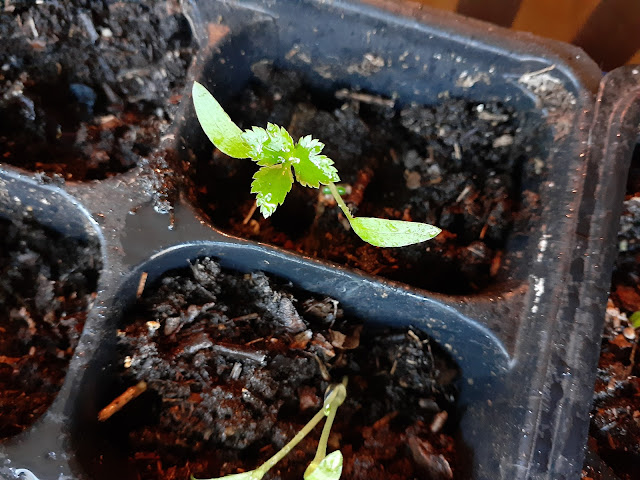 Mitsuba is a Japanese vegetable which we often put in Miso soup. It has a refreshing aroma and crisp stems. I have never seen them in supermarkets here in Canada, but we found Mitsuba seeds online, so we bought them. 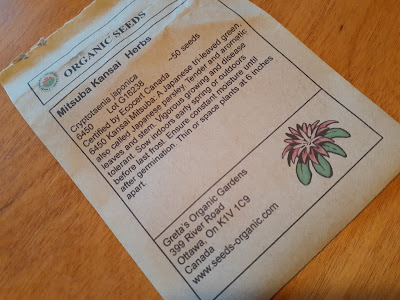 We sowed them a few weeks ago, and something has now germinated. However, I was not sure whether they were really Mitsuba or something else, because this is the first time for me to plant them. Since the soil which we use for seeding beds is mixed compost, it sometimes contains leftover vegetable seeds or weeds. Therefore, I was not sure if they were Mitsuba or something else until yesterday.

It has a third leaf with the little sprout and obviously, it is Mitsuba, a ‘trefoil’. It is a tiny leaf, but it is already the same shape of an adult Mitsuba leaf. I was so happy! 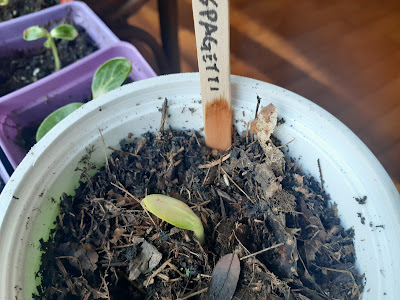 The spaghetti squash seeds have also germinated. I just planted two of them because they take space as they grow. 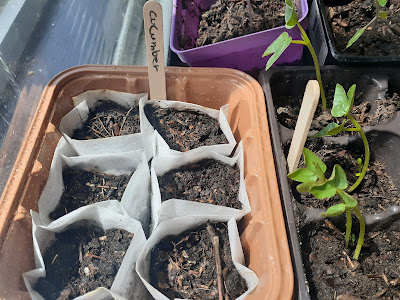 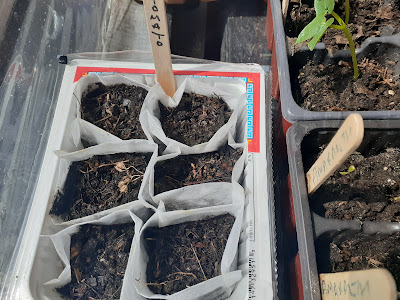 I sowed cucumber and tomato too. We planted them before, but some of them are not doing well. I put them in the warmest place in our house, hoping they can smoothly grow.

The seedlings of salad amaranth (these amaranth are for eating and not ornamental), which were raised from seeds, have g...

Cucumbers planted in tea bags germinate! The root is stretching outside the bags

I planted cucumber seeds in tea bags and all of them germinated. It's amazing. on 6 May 2021 They are very heal...

How to Regrow Spring Onions

I often use spring onions for cooking. Spring onions are very strong and you can regrow them easily at home. In fact, l...

Our raised beds were not looking good because of the rotten wood on the edges so we changed them using cedar boards. Y...
Sponsored links
Spring Onions are Regrowing!
Transplanting Pansies into Flower Beds
Home
cucumber
Sponsored links