A few days ago, I wrote an article “Making good use of weeds” in Japanese (and also in English). I’ve been sharing posts of this blog on Medium from time to time, and I’ve received a very interesting comment on Medium from one of my Japanese readers who lives in the US.

I’m quite fond of moths. Moth motifs are very popular in design right now, aren’t they? I think “pest” and “weed” are big words from a human point of view. This year we are suffering from locusts in the US, but I think this is also a result of the imbalance caused by human’s neglect of nature.

Also, after I started vegetable gardening, I realised that I subconsciously expected that 100% of the seeds I sowed would grow and produce dozens of times more fruit. I think that this came from the image of commercial farmers. When I worked on an organic farm, I noticed that even though it’s organic, commercial farming is done against nature and against the soil. I feel more comfortable with my insect-eaten vegetables, because I think of them as dinner with my friends who live on the earth. Additionally, even if you grow too much, you cannot eat an enormous amount of natural food, not like junk food.

It may be a very different approach to gardening from the one of the mainstream, but the darkness in the mainstream is much darker.

Her comment made me think a lot, and it reminded me of something I’ve been thinking about since I started gardening in Canada in 2014. I thought I should write about it.

First, let’s talk about the terms “pest”, “weed” and even “vermin”.

I agree with her that those are selfish words and are really a way of classifying things from a human point of view. —I still use the word “weed” because it is convenient, but what the word “weed” means is particularly vague.

Weeds that grow in the vegetable garden are relatively easy to distinguish, but weeds that grow in flower beds are not that straightforward. There are sometimes weeds that we want to keep and that we want to grow as “flowers”. On the other hand, some species sold in garden shops as ‘flowers’ or ‘plants’ are so invasive that they can take over your land if you are not careful and in this case they may be recognised as ‘weeds’.

When I first started gardening in the countryside in Canada, I was still naive and felt a little uncomfortable pulling out the weeds that grew in our flowerbeds. Because everyone just wants to survive, I felt that it was in a sense egoism to sort them out with human preference and eliminate only certain things.

It’s the same with pests and vermin, they are all just trying to survive. When I look at Japanese websites, many gardeners or farmers introduce the use of insecticides and other chemicals, but I find that difficult to do.

I think Japanese people, myself included, have a tendency to want to follow “textbooks”; want to do everything in the proper way according to the instruction, believing that if we do things the right way by following professional people, then we will be rewarded for our efforts. However, in reality, there is not always a right way to garden or grow vegetables.

No matter how obediently you follow the textbooks written by the great gardeners or farmers there will always be something that doesn’t go well. There will always be something unexpected that happens in your garden because it depends on the complex mix of the land, climate and environmental conditions. I believe that there is no right way of gardening for everyone under any conditions.

When it comes to pest and vermin control, we tend to talk about “extermination” and “prevention”. I don’t think that’s wrong, but it’s not the only way.

As she mentioned in the comment above, if you grow vegetables without using chemicals, it is normal to get vegetables eaten by insects. In fact, most of our vegetables have been eaten too. When I look at other people’s blogs about gardening, I often see photos of beautiful vegetables like those sold in supermarkets and I feel a little embarrassed with our vegetables, but there is no need for me to feel embarrassed, is there?

Although I try to think that it’s because our vegetables are delicious, they are eaten by insects, but I still sometimes feel disappointed when our vegetables were eaten by worms. The other day my boyfriend said to me, “You still have over a hundred seedlings to transplant in the garden. There’s no reason for you to feel so down because a few vegetables have gone bad.”

He was right. I still have more than a hundred seedlings of amaranth which are waiting to be planted in the ground. 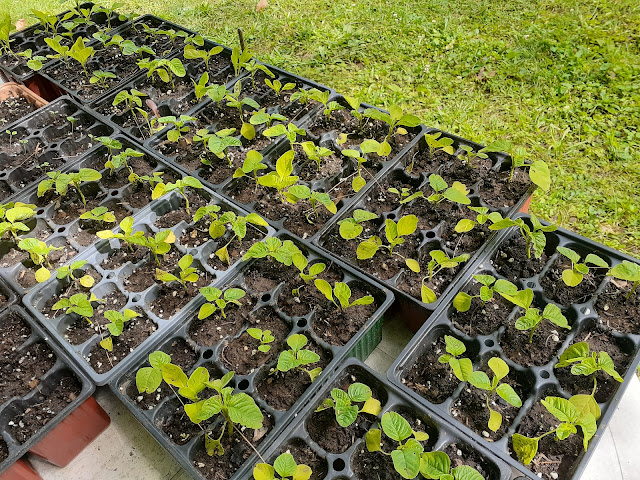 We are growing edible amaranth for the first time this year, and I read on the internet that amaranth is difficult to grow after transplanting so I sowed more seeds than we needed. In fact, most of them grew up very vigorously. We ended up still having over a hundred seedlings waiting to be planted, even though it’s already July…

The internet is a great way to get useful information for free. For example, a search for “how to grow (crop name)” brings up a lot of information. When I research about growing plants, I read every single link that comes up on the first page of the search results and they all usually say something similar. When multiple sites say the same thing, it’s easy to assume that “this is everyone’s opinion, so it must be right. We should follow them”, but it’s not.

Nature is much more complex than that, and different conditions will give different results. That’s why it’s not always going well even when we follow “everyone’s opinion”.

If you try to prevent a certain pest by doing “measure A” you are artificially disturbing the balance of nature and you may have unexpected consequences. What you do for the best may backfire on you. And then, you don’t know what to do about it afterwards…

That’s why I started trying to do things that are not in the “textbooks”. Every gardener has a different way to approach their garden and nature. We need to find ours. We need to try it to find the most suitable way to do gardening in our land. The experiment and experience matter when it comes to gardening.

Also, we have to be careful when reading the information online because the websites are always related to marketing. You’ll easily find all sorts of information about gardening, such as “buy clean, well-balanced soil for growing plants”, “use insecticides for early control”, “supermarket vegetables are genetically modified so they won’t grow well when you plant them, buy seeds at the shop where you can trust”, “potatoes from the supermarket may have pathogens because you don’t know what environment they were grown in, buy reliable seeds” and so on.

I don’t dispute all of them, but there’s a lot of things that you don’t know until you’ve tried it yourself.

So I don’t believe in “textbooks” and go my own way.

For soil, we sometimes buy compost, but I also use leaf mould that I have collected in the woods, which I mix with the soil for sowing seeds. So it is normal to find insects in the soil. We planted potatoes from the supermarket in our garden when they had sprouted and we harvested them. Of course, these are all your choices.

I don’t really follow what the professionals say about thinning either. As with weeds, I feel uncomfortable with thinning. It’s a bit cruel to choose something that can stay and others that have to leave when you know that everyone wants to survive. I cannot help recalling about human society where someone is chosen while the others are not. So I try to thin out as little as possible.

There was an episode on the BBC’s “Gardeners’ World” about planting lettuce in “groups”. Normally, when you grow lettuce, you sow a few seeds in a pot and then thin them out to make a single seedling in each pot. However, the gardener in that episode did not thin them out and planted three or four lettuce plants at one spot. I thought there were always different people doing things in different ways.

Some people even think that some vegetables grow better when they are grown in groups. It is true that when you thin out the plants, the one seedling left grows better. However, it is not clear whether thinning out can bring the best result when you think about the overall  productivity of your garden. 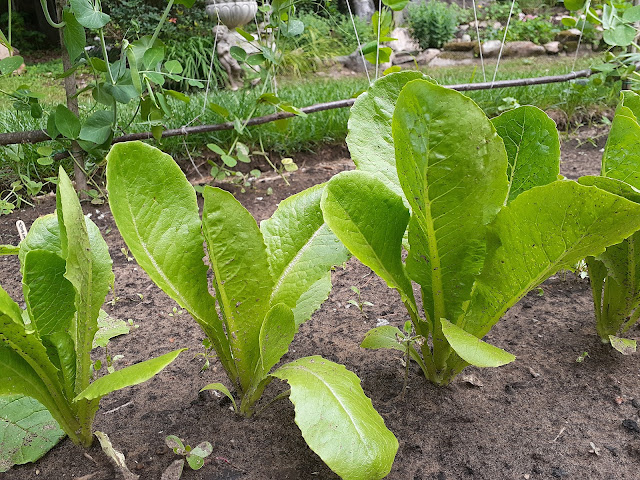 This is the romaine lettuce that we reluctantly thinned out to make a single plant. It rained last night, so the soil is a bit splattered, but they are growing very well. 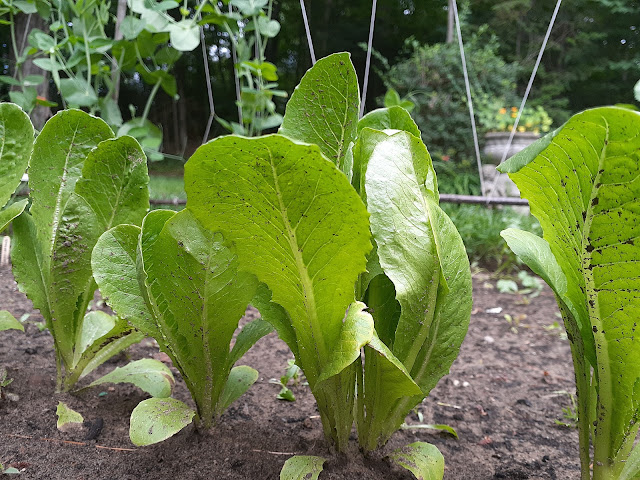 These are romaine lettuce too, but the middle ones are actually two of them growing together in one spot, if you look closely. When I was thinning them out, I saw these two plants snuggled up together like a couple, and I couldn’t bear to thin them out, so I left them as they were.

Although they are two plants, they seem to be growing beautifully as if they were one large plant.

As you can see, I don’t often follow the information even written by Doctors of Agriculture, but I enjoy finding my own way of facing nature. I make a lot of mistakes, but there is no perfect manual for dealing with nature. I’m sure I won’t get bored with our experiments for a while.

<<< Previous Post: Making good use of weeds
Next Post >>> Harvesting leafy vegetables: the more you harvest, the more they grow!

We have been expanding our vegetable garden and flower beds every year. This year, we've built a new raised bed and we'r...

Eddo had eyes, so we planted them

Eddo is a type of taro which originated in southeast Asia. Eddos are called Satoimo in Japan and are commonly eaten. We...

Making garden salad with the vegetables we harvested!

The vegetables are now getting ready to be harvested. Today we harvested lettuce, arugula, radishes and cucumbe...

When we first bought the seeds online this spring, I was excited because they had seeds of Japanese green Shiso which is...
Making good use of weeds
Harvesting leafy vegetables: the more you harvest, the more they grow!
Home
未分類