A couple of days ago, we saw the weather forecast predicting a minimum temperature of 1 degree Celsius. Our worry was the tomato and hot pepper plants in the vegetable garden that we had already planted could die.

In our area, the actual temperature is usually lower than the forecast, and if we don’t do anything, the frost will possibly kill those vegetable plants. So we decided to mulch with plastic as a temporary solution, which we have never done before. 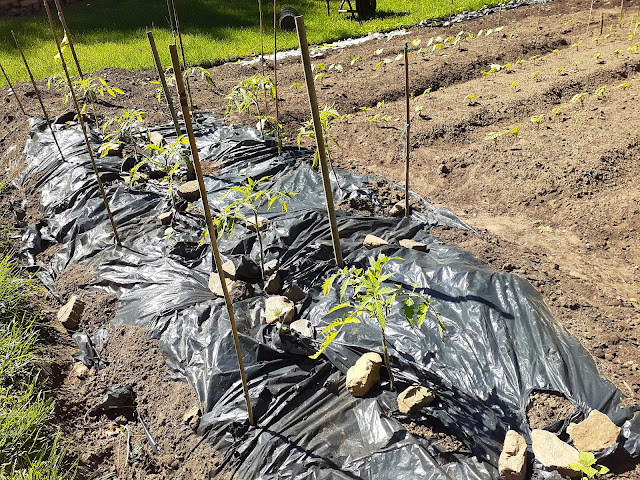 It’s a bit messy, but we hoped that it would keep the cold out. It was definitely better than nothing anyway. We used a rubbish bag full of holes which we used for composting autumn leaves. It was good that we kept them just in case. Everything can be useful one day. 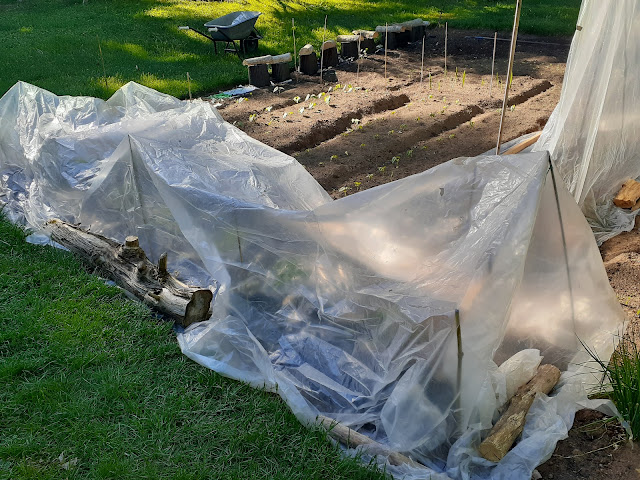 We put mulch on the tomatoes and peppers and covered them with a plastic sheet. It’s like a  messy tent, but it’s only for a night or two, so it should be OK.

We also covered the sweet peas with plastic. The peppers are still small so we put plastic planters over them upside down which looked like individual huts, though we’ll have to take them off in the morning.

Despite the rough and temporary solution, the tomatoes and peppers managed to avoid freezing to death thanks to the mulch and the coverings.

Unfortunately, some of the beans passed away due to the frost. Also, some of the impatiens in the hanging baskets are dying. Still, there are a few impatiens flowers that have survived and we can only hope that they will regrow.

We were told that there is a risk of frost until the end of May, but the snow has melted quickly this year, so we’ve done some gardening a little too early. We should listen to the locals sometimes.

Next Post >>> The reason why I prefer sowing indoors

Bad news! Gladiolus and vegetables should not be planted together, but we did!

Have you ever heard of 'companion plants'? If you've been gardening for a while, you've probably heard of the term. Wh...

Can we Grow Bean Sprouts in the Kitchen?

Potting up arugula for kitchen cultivation

We grow arugula every year. It's very easy to grow and once it's established you'll be able to continually harvest it. I...

We have two raised beds for vegetables, but the border wood was rotten a bit. So we are going to renovate them. The ...
Sponsored links
Low Cost Gardening: Ideas for budget gardeners
The reason why I prefer sowing indoors
Home
chilli pepper
Sponsored links