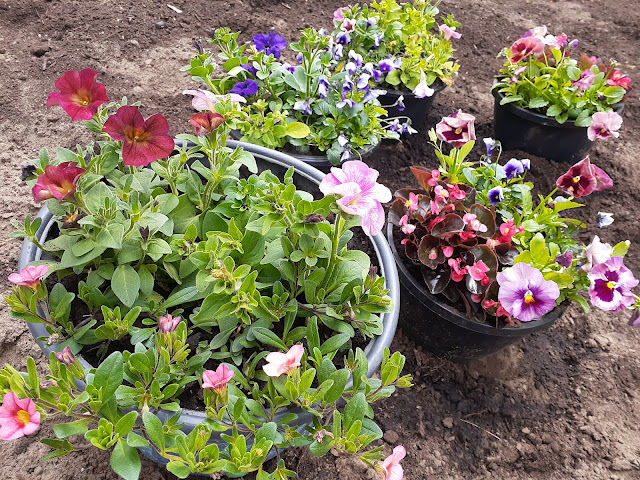 We make several hanging flower baskets every year. This spring, we also bought some flowers for making them  as well as vegetable plants in the gardening centre a couple of weeks ago.

We can’t plant any vegetables in the ground yet because the forecast says that the temperature will drop to 2 degrees Celsius next week, but the flowers that we bought are all relatively strong, such as petunias and pansies. In fact, we left those flowers outdoors the last few days, so I thought we could make hanging baskets with them and so I made some baskets today. I put the flowers in the baskets, but we are not going to hang them yet. Even if the temperature drops to below zero again, we can move the baskets straight into the garage where it’s a bit warmer than outside.

We bought two kinds of pansies, large mauve ones, which is my favourite colour, and small purple and white pansies. I’ve also chosen some purple petunias. By the way, we didn’t buy any yellow or orange flowers this year. Maybe we’ll buy some when we go shopping again. 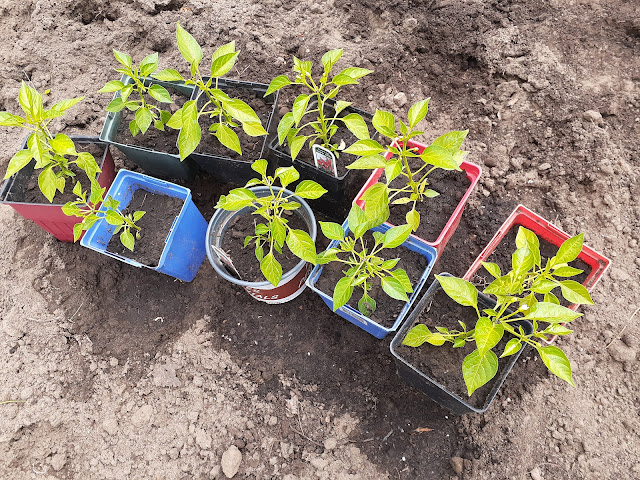 We also bought some pepper and tomato plants, but it’s still risky to plant them in the garden. The peppers have already started to flower, probably due to the temperature change from the greenhouse at the garden centre to our house. As I said, we cannot plant  them outside yet, so I have repotted them into larger pots. I think it will help the roots to grow. When it’s sunny in the daytime, we will put them in the garden, and we bring them back into the garage during the nights. I think I am going to repot the tomatoes in the same way.

Mulching for the first time

A couple of days ago, we saw the weather forecast predicting a minimum temperature of 1 degree Celsius. Our worry was th...

Some seeds need high temperatures to germinate. We live in a relatively cool climate, so it's difficult to maintain hig...

Can we propagate peonies by cuttings? I tried it!

We have a peony in our garden. We love peonies and we want to propagate them. Disappointingly, when I researched how to...

It seems to be common that peonies should be propagated by division, not by cuttings. However, I tried it anyway as I w...
Sponsored links
Sowing Vegetables in the Garden
Propagating plants by cuttings
Home
flowers
Sponsored links